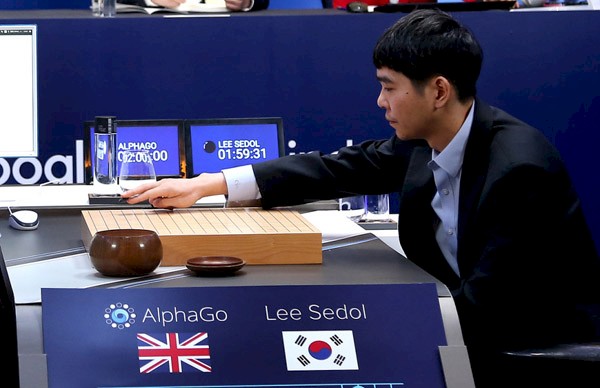 TThe remarkable story of how a machine beat the best Go player in the world 10 years before it was supposed to. What is interesting to see now is what this means and what happens next.

The rules of Go are simple and take only a few minutes to learn, but the possibilities are seemingly endless. The number above depicts the number of potential legal board positions - which is greater than the number of atoms in the universe - and was only determined in early 2016. Because there are so many directions any given game can move in, Go is a notoriously difficult game for computers to play. It has often been called the “Holy Grail” of artificial intelligence.

A computer therefore has to change how it plays over a brute-force approach – a strategy that can be used for games with less potential moves, such as chess, where it can evaluate all possible moves before making a decision. With Go, it has to break down the next most likely moves and their possible options, but it can only do that for a few steps at a time as there are so many combinations. Because AlphaGo has studied millions of real played games, it has an idea about how the game will proceed…but only up to a point. It has to constantly reevaluate.

How much of what we call creativity is about relying on or referring to past patterns? Certainly a syntax is needed to make sure a given innovation will serve a purpose.

Does the AlphaGo strategy demonstrate the seeds of creative thinking? Or just episodic brute-force and pattern-matching against outcomes learned from historic games…played by humans…who did the original creative thinking? At what point does it test hypothetical moves that no-one has played? And if it can play moves we never thought of, what else could it do?