What if a building had a digital counterpart? A sound object that revealed layers of why something exists - invisible but influential, communicating the deeper meaning behind the object, or in this case a dwelling, to help contextualise our perception of it?

I was hugely fortunate to be asked to contribute to a multi-disciplinary team designing a small lodging in the Saudi Arabian desert. My contribution was something that allows the building to be understood beyond its physical and visual reach, supporting the ideas that informed the conception of the building and able to be communicated in its entirety through digital means.

1. THE VALUE OF DIGITAL

“Where do we place value?”

Be it the awareness of dwindling resources around us, the rise of the digital, non-physical realm, or the concept of ownership, the answer to this question is shifting.

More and more of our lives are online. For example, the phone as an object is becoming less important relative to the information that lives within it. It’s the content that makes that object ‘ours’.

The scarce and expensive is being augmented, and sometimes replaced, by the ubiquitous and cheap, via economies of scale and digital replicability. The evidence is in the shifting focus of companies and economies to software, services and interoperability.

To paraphrase the artist Bill Viola: “Digital innovation represents the greatest invention. You can now see the invisible root structure - The space underneath the image. The visual surface is not telling the truth. As such the visual image isn’t enough, it is inadequate, because it doesn’t show us the invisible things, the connections.”

However, there is no digital substitute for what water does for the human condition. Information flows through us, it keeps us engaged, but it can’t keep us alive. Thus it is and will remain an ever more precious resource, and the focus of this project.

2. THE VALUE OF SOUND

In conjunction with image, sound gives us transparency - it is integral to a sense of place and orientation. Like peripheral vision it frames our experience, and along with our other long-range sense - sight - it gives us a sense of the context of our immediate environment. As it exists in time it gives a much better sense of how everything works together - how components connect and interact. Thus it is crucial to bringing us understanding, something impossible in representations that do not move.

This is why, for evolutionary reasons, sound is our fastest sense. We process sound about 3-4 times faster than image (according to the Saudi Journal of Medicine) There are other sources but thought this was more locally relevant to this project!):

Sound is therefore more visceral and immediate, allowing us to ‘see’ in the dark.

For this project, the emphasis on sound is really a question about the boundaries of a building:

A sonic distillation of the concepts that underpin our strategy, and developed in collaboration while the building was being designed, it aims to exist in memory as well as in physical form as a way to redraw these boundaries and a sense of what a building can be. Appropriately, as sound is our fastest sense, the reach of the digital sonic component is global and instant, and as it was developed as part of the design process it is not a signature or a response but rather part of its DNA.

The building is a focal point in the landscape. A place where the 4 elements: Air/Fire/Water/Earth can be manipulated and controlled. Referencing scale, material, water, mathematics, time, history, language, rotation, transparency, strata, environment and technology, the sound object is built around the following parameters:

the geometry of a pure sine wave,

the design of the dwelling,

the natural and man-made forces that shape the site and the building at Al-Ula,

the diurnal/nocturnal oscillation and

the concepts of the interplay between inside and outside.

Standing on the site you can see for miles in the horizontal plane. Think of this sound section as opening up this distance for the vertical plane. 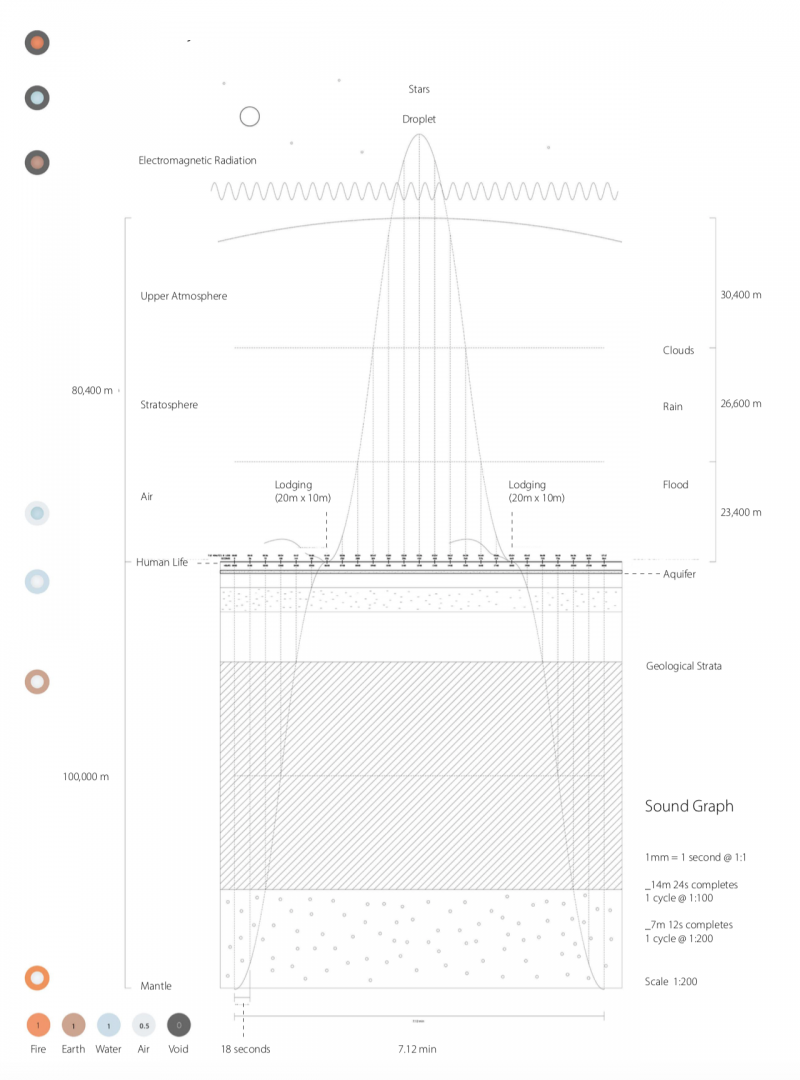 The vision for the final version of this piece will be in surround sound to immerse listeners in the environments of the site and the elements that have, and continue, to shape it. The aim is to bring a much richer sense of place, enclosure and openness. The final piece would also be longer to evoke more of a sense of planetary vs human scale and will have more specific references to the landscape, the sonic qualities of the building, and the flora and fauna of Al Ula. This would be achieved by gathering field recordings from the site in different weather conditions, interior recordings of the built dwelling and for different human activities.

It would also incorporate some frequencies beyond the range of human hearing - 40,000Hz - which allow a phenomenon known as acoustic levitation to occur: the ability of a standing sound wave (also a sine wave) to hold a droplet of water in mid-air. This frequency is already embedded in the track at the zenith of the sine wave, but would be connected to the levitator so that when the sound journey reaches the outer reaches of the atmosphere (as shown in the diagram), a series of water droplets on a table or a bowl (that mirror the configuration of the water-collecting etched stones outside the building) would rise into mid-air objectifying this precious resource and remain levitated until the sound piece 'reenters the atmosphere'. The sonic boom of the thunderclap later in the piece then disrupts the equilibrium of the standing wave causing the drops to explode into tiny droplets, cascading back to the ground as the sound of rain appears, to be collected and consolidated ready for the next cycle.

An Acoustic Levitator in action showing a single drop of water suspended by standing sound waves in mid-air.

The suspended droplets would be lit from above or below so would glow in the dark. The way the levitator currently works is that the drops are manually placed in the node points with a spoon - when the spoon with the droplet passes through a node point created by the standing wave, it 'sticks' to that position and remains held there until the wave is moved or turned off. Think of it as the same action as lighting a candle. But with water. And as the droplet would glow, it could serve the same function of illumination as well if there were a series of them.

This is just the first part of a sonic conversation - a living archive. Sonic contributions by visiting artists can evolve its fabric and the memory of the building, keeping it relevant and alive and hopefully serving as an ongoing source of inspiration to each new visitor. 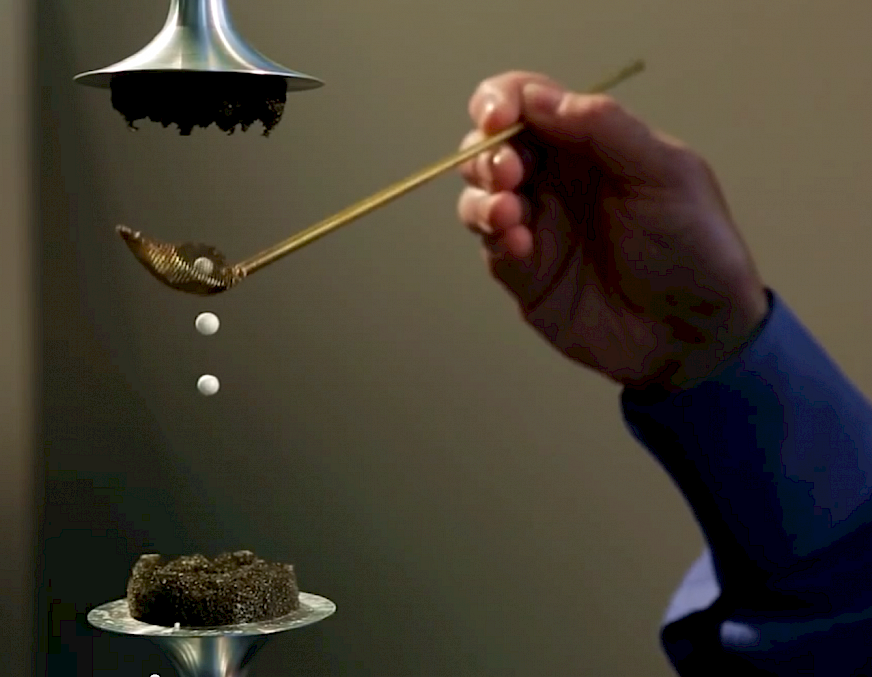 Placing droplets in an Acoustic Levitator.

A sound object submitted as part of a building design package for the Small Lodgings competition shortlist for Al-Ula in Saudi Arabia, a new UNESCO World Heritage site akin to Petra in Jordan that has been closed to the outside world (except for archeaologists) for several centuries.

Going from the planetary mantle to low earth orbit and back again. Each vertical dotted line represents an hour of a day. The sine wave's trajectory crosses various materials including geological strata, the aquifer, sand, human activity, air, electromagnetic radiation, rain, fire and earth - represented in this beautiful animation by John Cruwys. 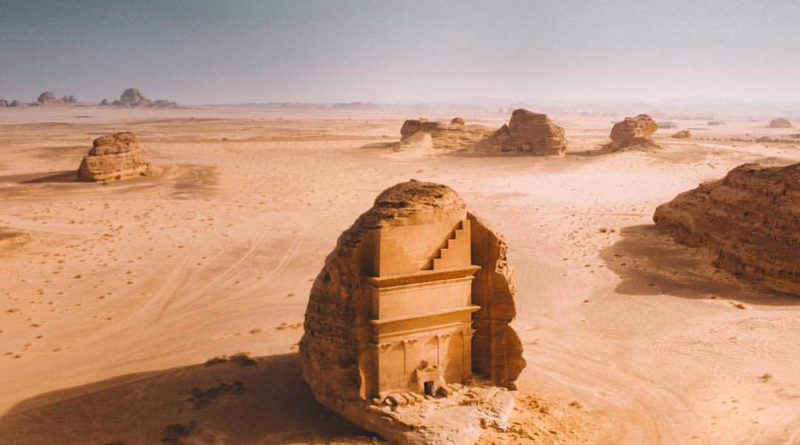 The Al-Ula region is vast and contains this ancient archeological site called Mada’in Saleh, built in the 1st Century AD. It is about a mile from the site we were looking at. Photo : Gab Scanu 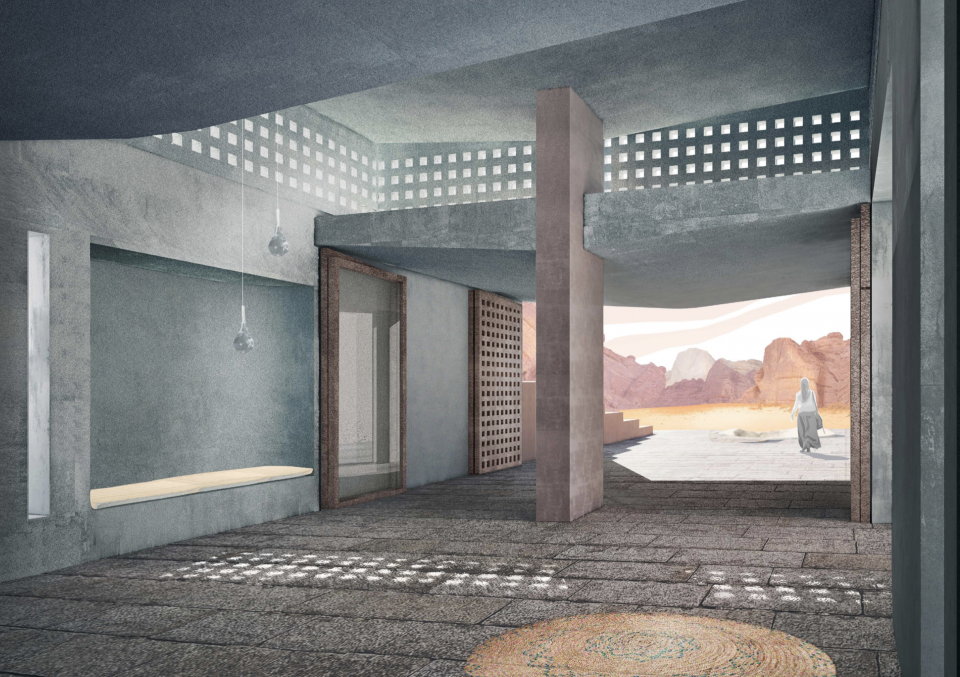 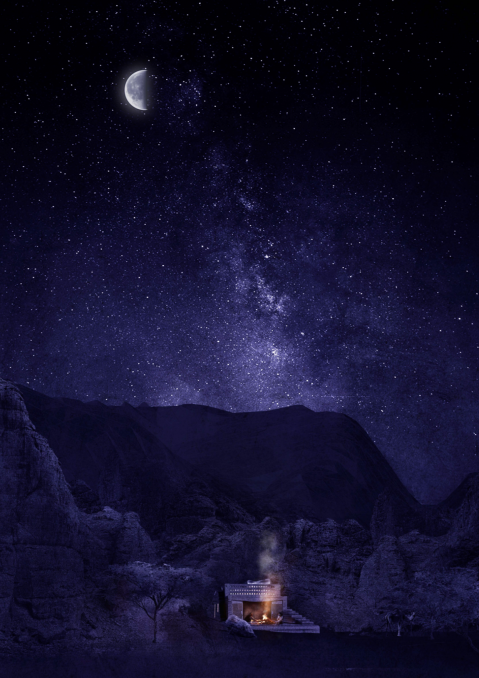 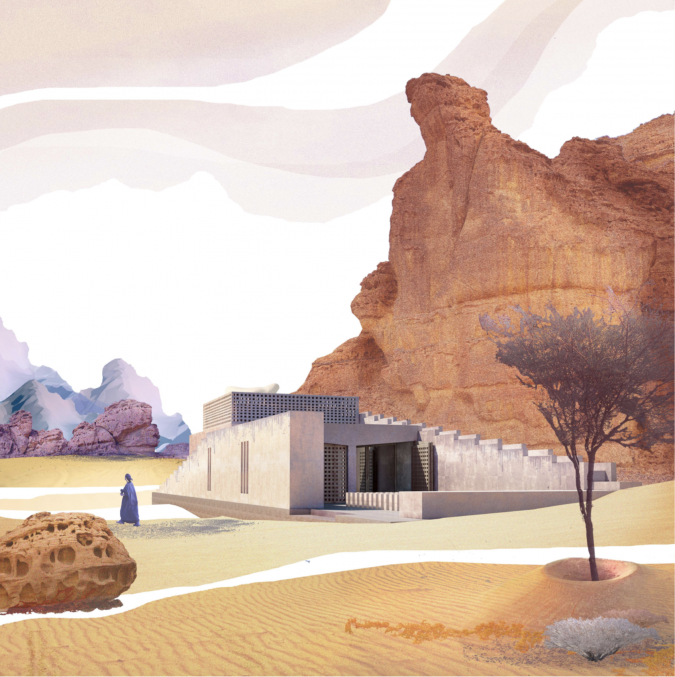 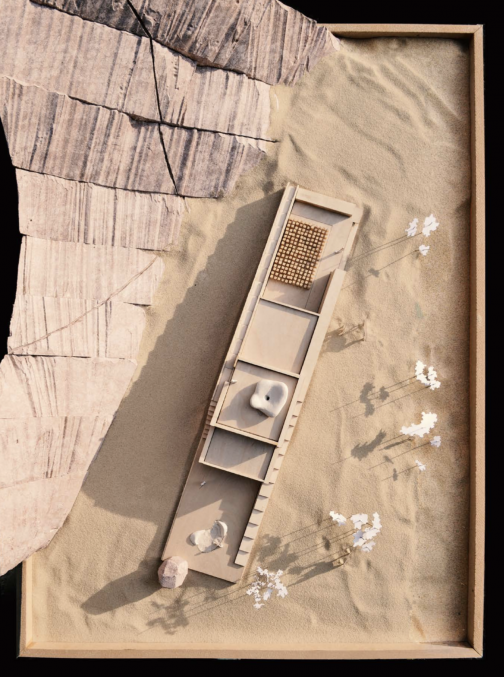 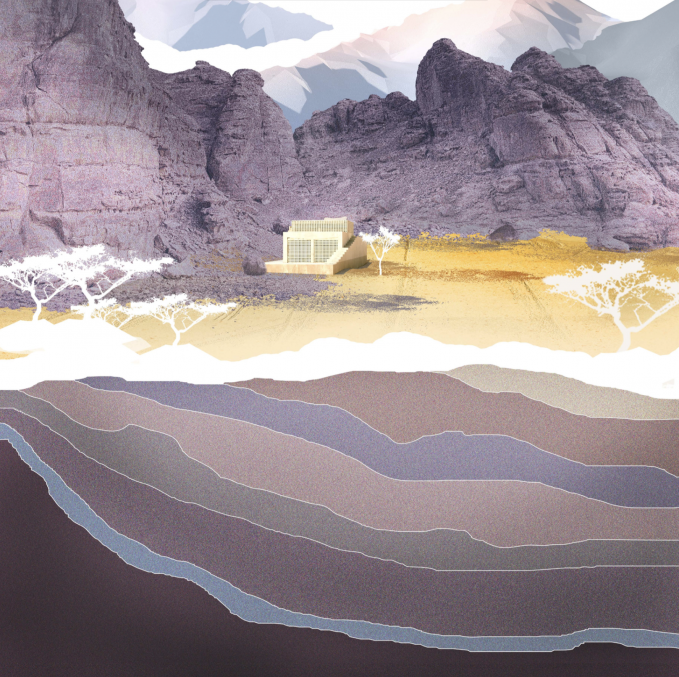