This was a fascinating brief that posed many questions: How do we use sound to navigate and have a sense of place and context; to have a sense of present and past; or a sense of self? How do we reference the difficulties of dementia sufferers when symptoms vary so widely?

The animation that was being produced was a rich and detailed tapestry, full of potential avenues to explore. The sound needed to address a multitude of points of view: from the day-to-day inhabitation of the Orchard Centre as a building – with parts that come to life at different times of day – to the personal experiences of the people who live and work there, and the wider cultural symbols that form part of the identity of both building and country. 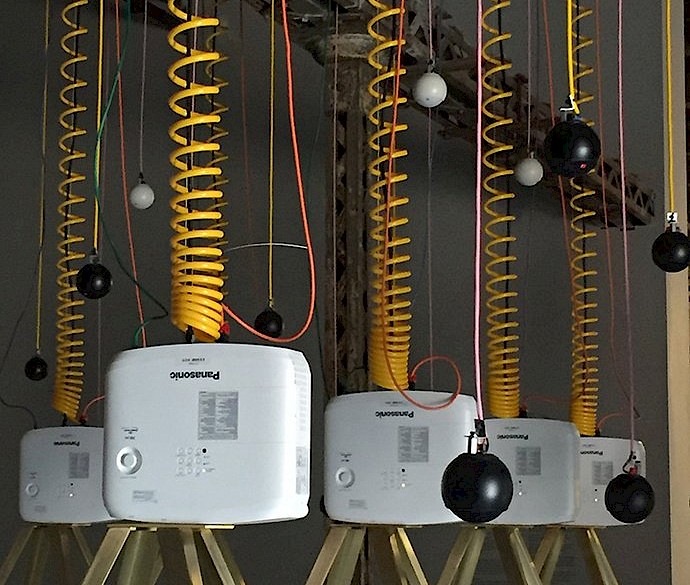 The design has 16 channels dotted around the space; the majority directly in and above the centre structure, with a pair in the rafters and two pairs behind the viewer. With this distribution of speakers we could play with how people would position themselves in our space and guide their focus: we could put people 'into' a room, by pulling sound behind them – thereby inviting them into a drawing. We could put them 'out' of a room by pushing sound into the centre only, to encourage them to look into/onto a scene. For example, the rain that falls halfway through the piece starts in the rafters, descends into the centre structure and then is pushed behind the viewer to place them at the centre of a thunderstorm. Conversely, daily activities and fragmented conversations play locally in the speakers above corresponding points of the plan. Lean in, and hear what happens in that space; walk away, and the sound melts away into the real sounds in the room. Treatment to the sound meant we could make the sound appear to come from next door, or inside a box - adding a further level of isolation. 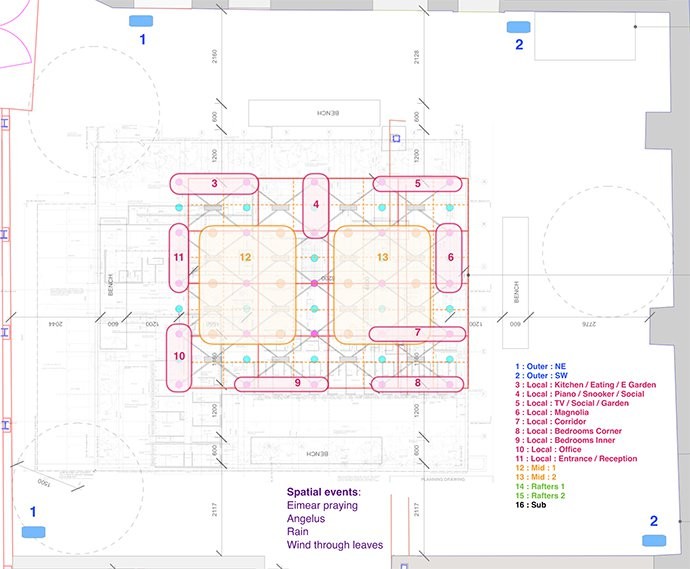 In the animation, room-shaped grids appear periodically to represent the 'grid cells' in our brains that we use to understand space. In sync with these, I used a repeating digital clicking sound that cuts through all other sound. This acts as a net to define a boundary, defined in this case by time, but also in a consistency of sound that you come to recognise each time it plays. When a grid sound begins you might start looking for where the corresponding visual grid is appearing. Like in the brain, intensity denotes activity: overlaid elliptical rhythms add weight when more grids appear.

To get a sense of the spatiality of the piece, you need to wander around the perimeter of the installation whilst the piece is playing. As different parts of the building become active, walking around the plan helps you to interpret the spatial organisation of the building, as well as your place within it. Even though the boundaries are ambiguous, the linking of these sound 'rooms' to the activity in the visuals gives a sense of whether an event is happening 'here' or 'there'. This helps to locate you – the listener – in a specific place within the building.

Representing the symptoms of information and memory loss:

1. The 'Lass of Aughrim' – a song that features prominently in James Joyce's 'The Dead' – is played on a piano, losing notes as it goes: prompting the listener to fill in the gaps. Fragments of the past are featured throughout the piece: a sports commentator's voice, familiar theme tunes, the Angelus. These are sounds deeply engrained from decades ago.

2. Vinyl scratches and pops denote missing information in a physical object: a blank sector where information once existed. Niall's first reaction when he heard this was that he thought the music had been badly recorded. Which proved the point!

3. Digital static (or white noise) clouds the aural clarity: interference patterns block the sound, much like plaques and tangles block synaptic connections in the brain, or dust trips a needle on a record.

Representing only living in the present tense:

After experimenting with different methodologies, the best way to approach this seemed to be as a fly on the wall: listening to others' conversations, but not engaged in them. At one point, a group of people sing 'Happy Birthday' to Dennis. Yet we don't know who Dennis is, or how old he is: maybe he is someone we know; maybe not. Listening to everyday sounds can be soothing and familiar, but devoid of context these sounds can be disorientating. We strain to find a pattern, to understand the narrative. 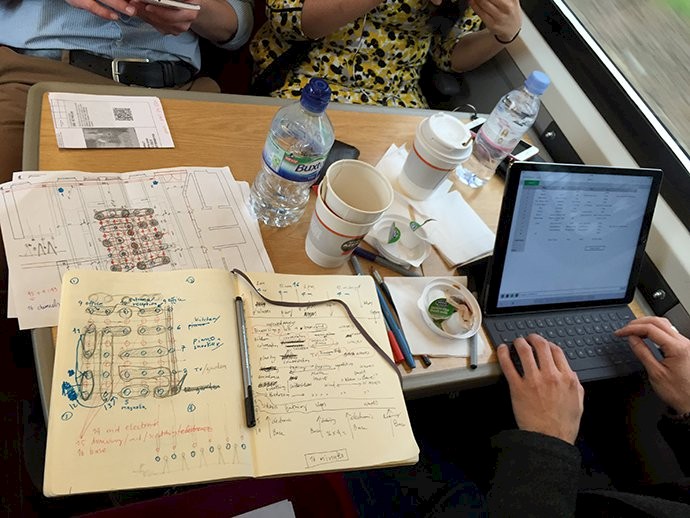 In Alzheimer's disease, plaques and tangles build up and block the signals between synapses. As brain cells die, vital memories disappear, and the brain shrinks. What I wanted to communicate was: what does this mean? How does it feel? The common experiences I started to see amongst people with dementia were feelings of isolation, confusion and frustration. Short memories fade first, older memories fade later. I came to understand that the last thing people remember is possibly music and praying, sounds that go back to early childhood and are lodged deep in the brain. 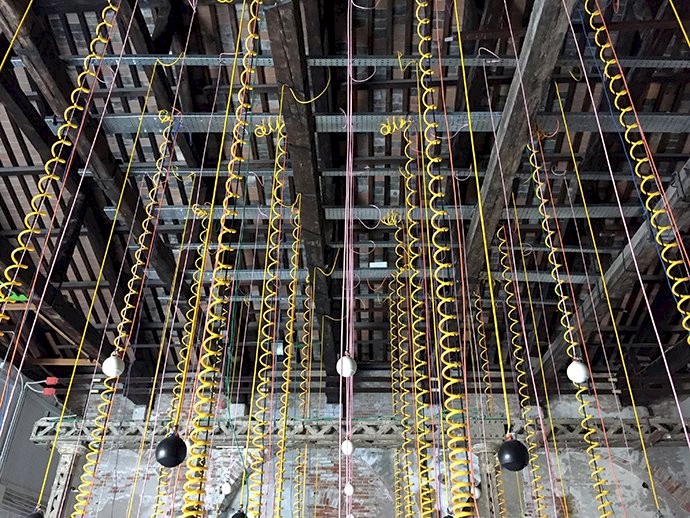 Environmental sounds in the outer speakers locate the building in a wider context and indicate the time, of day and of year. The animation is on a loop and the sound begins and ends with water. This is a reference to James Joyce's 'Finnegans Wake', which ends halfway through a sentence with the River Liffey flowing towards the sea at dawn; with the rest of the sentence forming the first few words of the book. In the case of the Orchard Centre, the sea lies to the north east so when it appears, the sound washes in from that direction from one side of the room to the other.

In Ireland, the Angelus bell marks particular times of day when everybody stops to reflect. It is a reliable metronome of daily activity, found everywhere and represented here in all speakers simultaneously. The echo of the Angelus comes back at the end, forming a bed for the twilight portion of the piece. Sounds of rapid freezing and blinking blue fluorescent lights/synapses are accompanied by the deep indigo of the animation as the sea washes in. The last embers of remaining sounds lose mass (by slowly dropping their volume and removing the bass frequencies, which makes the sound 'thinner') and retreat into the centre of the installation before evaporating up beyond the rafters.

'Losing Myself' was the multi-media Irish entry to the Biennale Architettura 2016.

The project was a collaboration between Niall McLaughlin and Yeoryia Manolopoulou, exploring dementia, architectural representation and the contrast between the architect's intention for a building and its subsequent inhabitation. It is the first architectural design project to examine dementia by bringing together perspectives from neuroscience, anthropology, health, art and design. It was developed through research conversations with experts and a new method of drawing, demonstrating an informed and imaginative engagement with dementia.

The title of the project, ‘Losing Myself’ is drawn from the principle that architects have a responsibility in their designs to imagine the experiences of others. Here they have tried to develop a process of drawing through which they can imaginatively inhabit the minds of people with dementia, whose view of the world is not immediately clear to us. The drawing presents the fragmented and overlapping perceptions of people with dementia, rather than a representation of the building as a static architectural object. The installation imagines the ways in which dementia might affect an individual’s ability to synthesise and navigate their environment, based upon their observations, conversations with experts and people with personal experience of the condition.

The open-access website www.losingmyself.ie compiles the authors’ design research and their recommendations, called ‘16 Lessons’, to put forward a holistic approach to creating dementia-friendly environments for all.

While most literature produced on dementia for architects focuses on ‘best practice’ guidance, Losing Myself encourages thought and debate across disciplines, expanding the capacity of built environment professionals to better understand and empathetically design for dementia and ageing. It also involves research into spatial cognition and a deeper comprehension of how mind, body and architecture interact as a whole. 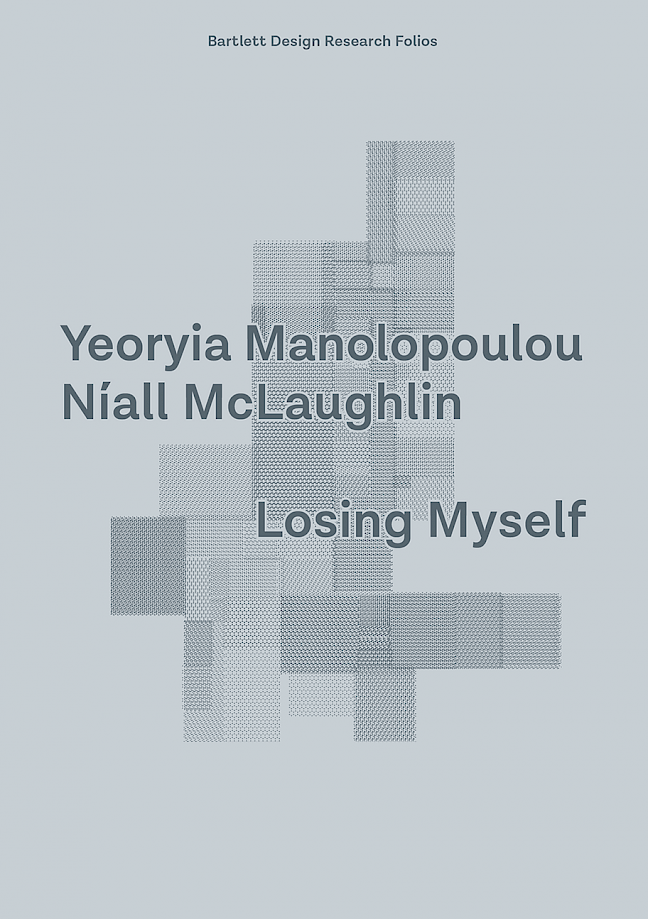