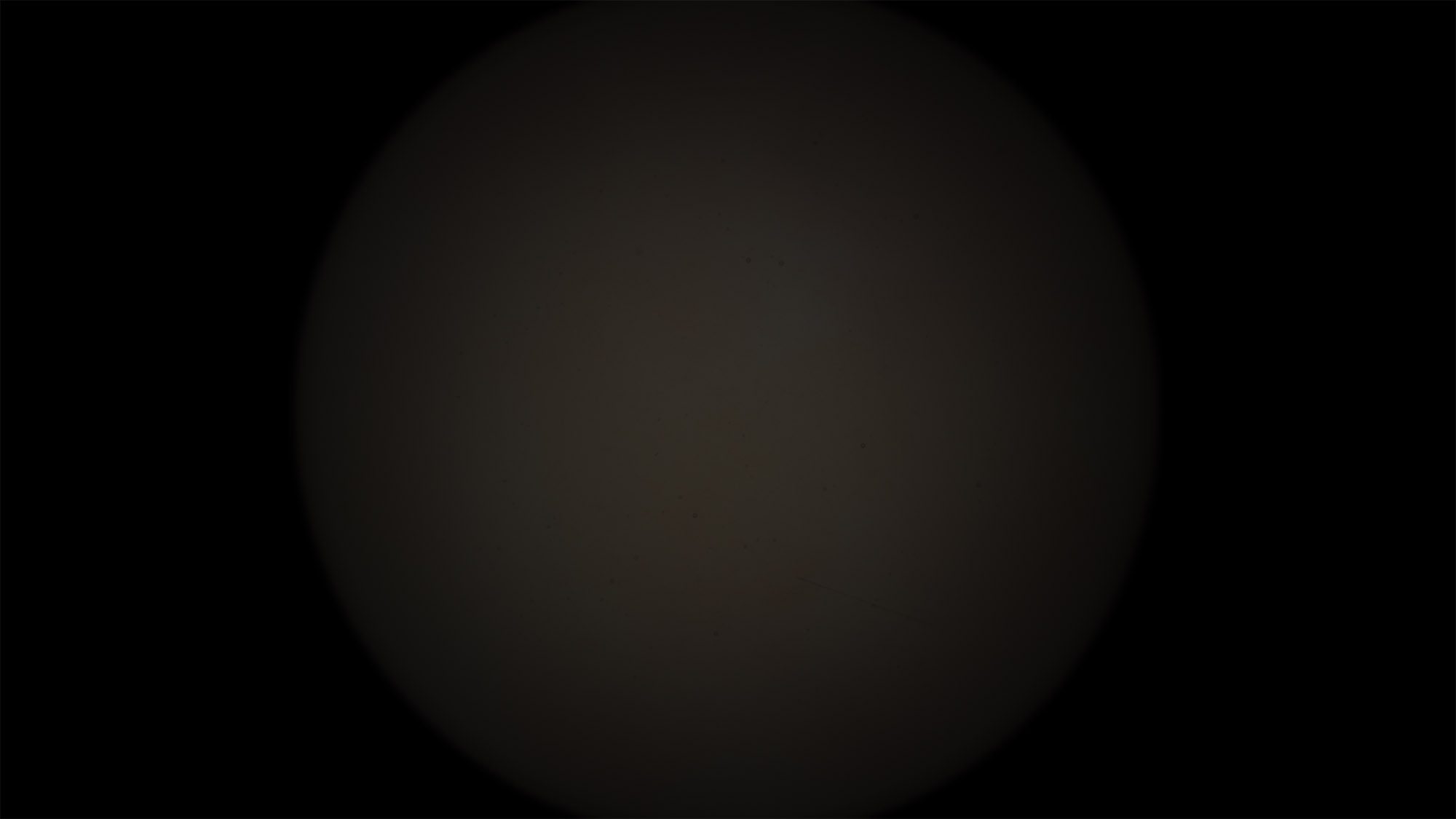 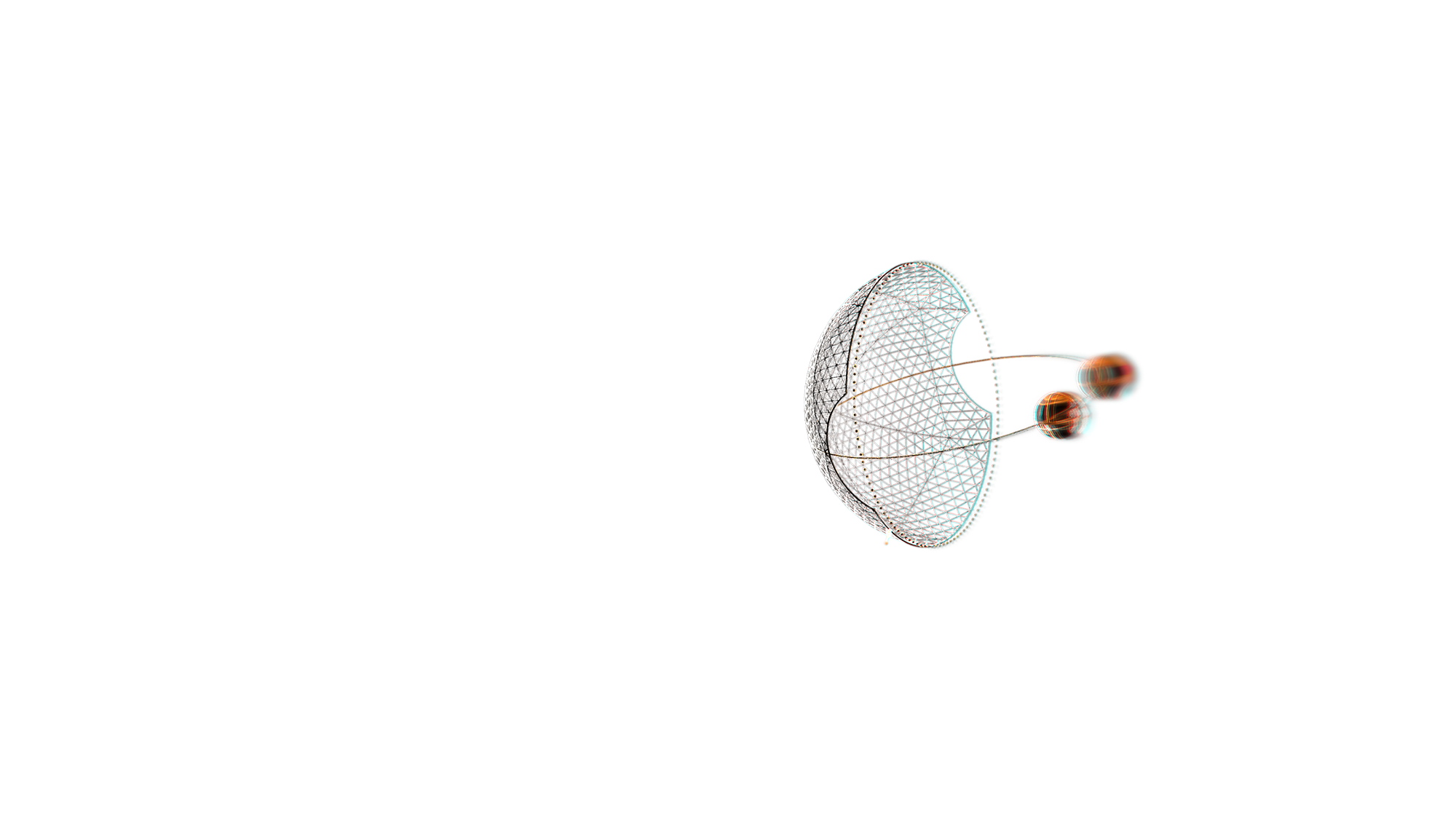 Between The Retina + The Dome

Penelope and John approached me with the brief, the first animatics of the film and the inital response to the questions which took the form of a drawing on parchment. From illuminated manuscripts to lenses to our current understanding of how we see and understand visual images, there was much to explore in terms of space, sound and concept. Dr Haralambidou's response to the questions posed in the brief is below.

It was a great project to work on - I chose a palette of instruments that reflected the overriding geometrical syntax of the piece - the circle - and the pace of the film lended itself to more contemplative instruments. So I chose circular and rotational instruments : balinese gongs, nepalese singing bowls, cymbals, metal coins in a balloon, glass, water, a womb, sine waves, bells, balls and various tonal instrument sounds that converge to create the atmospheres and sense of space.

Scale was also an important part of the piece - are you looking at the objects at a microscopic or galactic scale? It is deliberately ambiguous though spaces are naturally suggested with different reverbs and suppression or augmentation of different frequencies. The film itself is also circular, it is designed as a loop, so hopefully the final result is engaging and thought provoking.

The perception of three dimensions - brought to life in the film by the use of anaglyphic techniques that can be seen with the classic cyan and red 3D glasses created another opportunity - how to make the experience more immersive once objects start to appear to float in front of the screen, putting the viewer in the picture? Manipulating reverbs again, creating doppler effects and adding immediate sonic context draws you in, playing with the notions of inside and outside - which feeds into the ambiguity of scale mentioned above.

The work is on show at the Universtiy of North Carolina in Charlotte as part of a show entitled SEE-ING - The Environmental Consciousness Project, during October and November 2018.

Between the Retina and the Dome

"Two eyes focusing on crescent retinas and a complex anatomy of optic nerves form our visual perception, the workings of which we still know very little about. Furthermore, stereopsis – how the brain creates a single image of the world from two curved and inverted images – is not very well understood. Instead, the common view of vision is, still today, under the shadow of a simplistic geometric scheme, established during the Renaissance and based on a single eye forming an idol on a picture plane: a single retina. This assumed perceptual geometry affects not only how we understand vision, but projects itself onto the built environment. In the centralised Renaissance church, the anatomy of the single retina is cast in stone as a holy oculus, or a divine eye, taking the form of a dome. Entitled Between the Retina and the Dome, this twin drawing essay hypothesises that the constructs of our visual perception and the built environment are cast in each other’s image.

Recently, digital technology introduced a new type of virtual perception that remembers the forgotten ‘other’ eye and emerges at a space between the body and architecture, between the retina and the dome. Can our contemporary exposure to stereoscopic immersive technologies affect the way of not only how we draw and build, but also how we see?

"I have thought of making an anaglyph (red and blue) apropos of a Spanish chimney of which I have made a sketch in three dimensions for the mason who is executing it in our new summer home. This handmade anaglyph should produce a three-dimensional effect when viewed through a pair of spectacles with red and blue filters." - Marcel Duchamp

Anaglyph is a technique for viewing stereoscopic images, rendered in chromatically opposite colours – typically red and cyan – and using red and blue glasses to derive the three-dimensional effect. Through the glasses, the anaglyph sketch renders a virtual volume that blossoms between the viewer and the drawing surface. The piece reflects the artist’s life-long interest in the architecture of vision and stereoscopic depth, which was also the theme of his first major work known as the Large Glass, 1915-1923. I see the anaglyph as an early predecessor of contemporary digital immersive technologies based on stereoscopy; a representation that exists at a space between our perceptual system and the physical world: between the retina and the dome.

Taking as a starting point Duchamp’s preoccupation with a poetic portrayal of stereoscopic vision and the red and blue expansion of depth in the anaglyph, Between the retina and the dome reflects on our currently rapidly changing construct of visuality and the loss of the drawing surface. Depicting a constellation of independent, but related figures, it is an essay in the form of a twin drawing: an ‘illumination’ hand-drawn with red and blue ink, gold and silver gilding on parchment (36” diameter round image) and a lyrical digital animation (video) linking the deep past of spatial representation with its fast approaching future.

Parchment is a thin membrane made of animal hide – off-white, soft and semi-translucent – a painting and drawing surface that predates paper and has been revered by architects and artists throughout history. The earliest medieval architectural drawings, ‘illuminated’ (decorated with gold and silver gilding) pages in manuscripts and maps survive due to the extraordinary durability of parchment. Attempting to ‘figure’ the complex architecture of vision by hand, the first part of Between the retina and the dome is an ‘illumination’, drawn by hand on animal skin. The piece remembers the forgotten past of the drawing surface, which could not be more visceral: images can remain tethered for several hundreds of years to not only inert but also organic, animal matter.

The illumination is dominated by two central figures relating to stereopsis, the ‘Chiasma’ and the ‘Horopter’.

The ‘Chiasma’ portrays the complex micro-anatomy of vision. Starting from different regions of the two retinas the optic nerves cross at the optic chiasma (from the Greek χιάζω 'to mark with an X', after the Greek letter 'Χ', chi) and reunite at the visual cortex. The upper part describes the act of looking at a dome, starting at its double inverted images within each retina, which merge incrementally to form an anaglyphic dome. The figure aims to expose this relatively unknown, but remarkable, rupture in vision that occurs after images are formed in the retina.

The Horopter (from the Greek ὅρος (hóros, “boundary”) + ὀπτήρ (optḗr, “observer”) is a theoretical construct describing the geometry of corresponding points of the two retinas – an attempt to define a binocular picture plane. The figure draws a comparison between the surface of the ‘Horopter’ and the convex shell of a geodetic dome, a rigid lattice. In a further transformation, connecting it to the etymological origin of the word ‘retina’ (net-like veil) this malleable membrane loses its mathematical rigidity and similarly to a veil falls onto the relief of the binocular visual field. 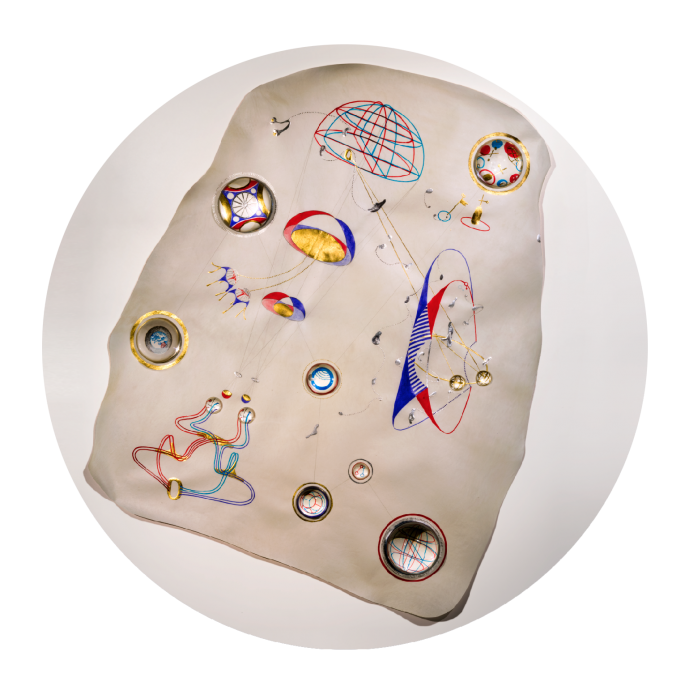 The two main figures are surrounded by an archipelago of associated characters and circular diagrams reminiscent of cosmological maps: a constellation of hand-drawn anaglyphs that expand in 3D with the use of red and blue glasses, an interpretation of an early stereoscopic slide by Zeiss, a chain of nodes describing the shoreline of vision and the tectonic curved geometry of a celebrated Renaissance dome.

Seven crystal half balls positioned on the circular islets act as lenses that magnify and refract the images underneath. Resembling both the eye’s cornea and a glass dome, they also weigh down the parchment, which, as a ‘living’ surface, tends to curl with the slightest change in humidity.

In contrast, the film, which is conceived as an animated/sound drawn counterpart to the illumination, celebrates the recent loss of the drawing surface. The hand-drawn parchment figures blossom and start swaying. Shifting scales, from the minuscule to the cosmic they resemble either organisms studied under a microscope or planetary movements observed through a telescope. Paraphrasing the material attributes of the gilding and blue and red inks, the same characters between the retina and the dome are here mobilised and dressed in anaglyphic golden ‘matter’. Notional lenses rotate to focus on different parts of the scene and darkness accentuates the loss of the drawing surface; the figures appear floating in indeterminate space. The elegant choreography of the forms is augmented by a playful and atmospheric soundscape that draws out the unfamiliar materiality and the dramatic shifting of scales.

Paying tribute to Duchamp’s last anaglyphic drawing, parts of the twin drawing – the illumination and the digital film – split and blossom in three dimensions when observed with red and blue glasses. Historically, the constructs of our visual perception and the built environment are cast in each other’s image: in the centralised Renaissance church, the anatomy of the single retina is cast in stone as a holy oculus, or a divine eye, taking the form of a dome. Influenced by our contemporary exposure to stereoscopic immersive technologies, the loss of the drawing surface and a study of the structure of our visual perception, this essayist twin drawing is a dramaturgy that introduces a playful group of new characters, in the space between the retina and the dome."

Best listened to with headphones and viewed with traditional red and blue 3D glasses.

Working with Unit 24 course leader Penelope Haralambidou and 2018 alumnus John Cruwys, this project is an investigation into how we see and and the mechanisms by which we construct and understand the stereoscopic images fed to us by our retinas.

Comprising of a drawing and a film - but it could be described as three drawings (the hand drrawn 'illuminated' parchment, the animation and the sound) - the work is a response to three questions posed by the exhibition organisers: