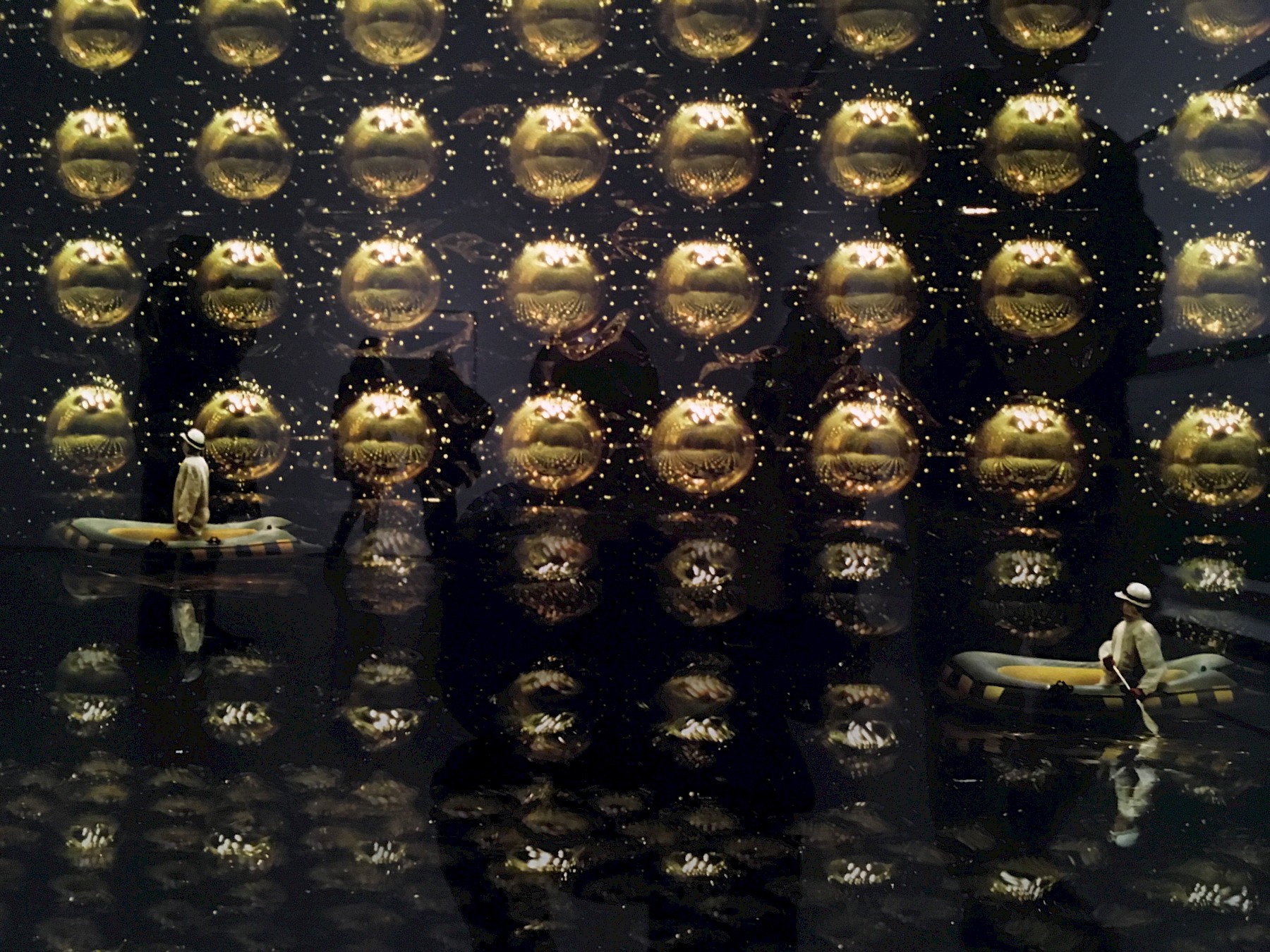 TThe photographer Andreas Gursky has a major show marking the reopening of the Hayward Gallery and it is breathtaking in its vertiginous, overwhelming and captivating detail. Images large enough to go beyond your peripheral vision are a riot of information and the effect is spellbinding.

But all is not what it seems. The images have been manipulated but you can't tell where as your eyes look for the seams - there is so much information that it's an impossible task.

"Driven by an interest and insight into ‘the way that the world is constituted’, as well as what he describes as ‘the pure joy of seeing’, Gursky makes photographs that are not just depictions of places or situations, but reflections on the nature of image-making and the limits of human perception. Often taken from a high vantage point, these images make use of a ‘democratic’ perspective that gives equal importance to all elements of his highly detailed scenes."

This video showcases his approach to photography:

One of my favourite of Gursky's works is 'Kamiokande' - a photograph of one of the most improbable places on Earth: a 40m high giant chamber a mile underneath a mountain in Japan - Mount Ikeno - encrusted in golden spheres that are used to detect the most elusive of subatomic particles : the neutrino. While abundant they are hard to detect because they go straight through matter. This photograph was taken when the chamber had been drained for cleaning - it is normally filled with 50,000 tonnes of ultrapure water. Only down here is the environment isolated enough to observe the tiny effects some of these invisible particles make. Something so large to detect something so small. The scale of the chamber is not apparent until you see the tiny boatmen in the bottom right hand corner. It looks straight out of a science-fiction movie. After the initial impact of the giant image, the questions begin: What do those golden spheres do? Is that really a boat? Are those really people? What are they doing? How does this contraption work?

Another favourite is 'Amazon' (2016) - a cacophony of colour and shape, seemingly impenetrable and disorganised, yet each item is meticulously mapped in a computer - is this a triumph of supply side technology? Or an insight into the horrors of 21st Century consumerism? It is amusing (yes there is a Donald Trump for President mug in there - but good luck finding it) and deeply depressing at the same time. This duality is possible because of the sheer scale of the images as you are able to appreciate the scene at different scales.

"I think this really an image about our desire for controlling nature, rather than an image of a real river." - Ralph Rugoff

A silvery strip of agitated sky is sandwiched between furry green. An impossible perspective makes you continue to try and reconcile the geometry. Knowledge of the erased buildings and other man-made structures - if you have read the accompanying text - nonetheless spur your brain to look for whispers of their existence, but there is none. Both flat and deep at the same time this image, as in most of Gursky's work, invites you to do some work. Just trying to figure out what was done and how, or the precision and sharpness of the image meaning you can pick out every blade of grass, which has been reformed like astroturf, keeps you engrossed. It also looks faintly familiar, recalling a Rothko or a sideways Barnett Newman. Painting meets photography. Real meets enhanced and altered, making it a lie, but exposing a truth at the same time. Alien yet familiar. This duality plays through much of Gursky's work.

Another favourite is 'Montparnasse' (1993) - a meditation on chaos contained within order contained within chaos contained within order, etc. The measured and regular rhythm is punctuated with unexpected colours and shapes. The way the photograph is framed suggests this contained energy goes on for ever on either side. The effort to homegenise is apparent in the design - but only at a certain scale - look closer and you see every cell is unique and none are the same. Pull back and it looks even and ordered. These kinds of effects are greatly enhanced and are only really possible with images at his scale and detail, enhanced by the unseen hand of digital manipulation that you know has occurred but you can't easily see where. A neat encapsulation of the modern condition. But it also raises deeper questions : Are order and chaos are scale specific? Or are they always mixed in together? If there is a stratified relationship to order and chaos is this reflected in other phenomena? For example - could the laws of physics also be scale-specific? Do certain forces exist at certain scales and not others? Or are all forces always there - however weak and undetectable - until they gain enough scale to have an effect?

If the stratified model turns out to be the case - chaos and order start to look like an oscillation. Just as gravity has been found to be a wave, so maybe other things we take as constants are also oscillations - or waves. If all constants are in flux - albeit very slowly - could this explain the unexpected phenomena that we start to see at the quantum and galactic scales? (Neutrinos are also believed to oscillate - changing flavours to make them even harder to detect).

I'll be exploring these concepts more in subsequent posts but it seems relevant here. This line of thought started when I first saw Charles and Ray Eames' seminal film 'The Powers of 10' where you can clearly see the alternating layers of matter and void. Activity and inactivity. Yin and Yang. 1 and 0. Each layer is only visible and comprehendable as a layer when we enter the next layer. The 'other' that allows and brings perspective:

But back to Gursky. Put simply: the exhibition runs for one more month. Go see it. It will change the way you think about photographs, people and places.